Prime time television cop shows are filled with it. Massachusetts’ Senator Scott Brown recently took to the airwaves about it.

When a family friend posted on Facebook this week that he had begun a new blog where he planned to write, for the first time, about the sexual abuse that rampaged through his life, I responded: good for you.  Sexual abuse of children is an epidemic. A silent killer of

spirits. To borrow a saying from my good friend Alan Lovins, it sits like stones on the heart. Crushing life and breath out of the victim. I picture the innocent women of Salem, accused of witchery. One of the punishments was to place boards across their chests and load stones on until the women were crushed to death.

In my friend Brad’s first blog, he says he is finally ready to face his past. However, he is not yet ready to reveal the name of his abuser, still afraid after many years. For now, the abuser is W***.  I immediately tried to fill in the blanks.  Walt? Whit? Will? Unfortunately, I didn’t know Brad back then and I came up blank.

I care deeply about a number of things. This is at the top of the list. When I learned that my oldest daughter had been abused by a family member, it was a decade or so past the crime.  She had been frightened into silence. The first revelation and others that followed slashed through our family in ways that we still deal with today. It turned out that both my daughters were victims.  Now survivors.

For so many, the legal system falls short. The crimes are discovered too late. Like Brad, like Scott Brown who also never told his family. Unless there is civil remedy and deep pockets of an individual or institution such as the Roman Catholic church, the survivors have to find their own way back. Books, blogs, whatever it takes to move those stones.

It’s never easy or comfortable to hear.  I remember when a best friend told me that her uncle had abused her for years; another friend told me that her father had “visited” her in her bedroom during childhood. My responses were inadequate. I regret that. We can’t be silent when the story is told. We owe support and outrage. We can also support programs that provide counseling and help to survivors.

We want to believe that we protect our children. We are often failing at this epidemic. The story does need to be told again. And again.

One thought on “Stones On the Heart”

I want to be like this boat I saw today. Spunky. Full speed ahead. Flying @DeathWishCoffee flag. 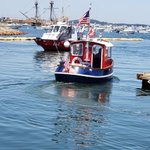