Erica Ferencik asked if I’d read and blurb her novel. I said of course. And what’s it about?

“A paranormal thriller about reincarnation and a mother who comes back as a viper.” Hmmm

I have some favorite Stephen King novels but in general I don’t read or watch horror/thriller. I know the way my mind works. Scary images can rear their ugly alien-snake-monster heads at any time. Vampires are  okay because I think of them as people with overbites. I actually liked Anne Rice’s Interview With a Vampire–book and movie, though Brad Pitt and Antonio Banderas had something to do with the appeal of the movie.

The bulky manuscript arrived in the mail, innocent enough looking in its shipping envelope. It sat on my side table for weeks until guilt got the best of me.

I did make it through her book, though I didn’t linger. I quickstepped through the pages, wondering how she’d been able to write such scary stuff. Her last book was a comedy about the real estate business.

Snakes. Serpents. Vipers. They’re right up at 12 on a scare scale of 1-10. The fact that I married into a family with a pet python in residence is a testament to my love for my husband. I manage to stay away from all things python in our home, which includes when it’s out for a playdate or being fed a rat. My only foray into writing about Luki–our ball python–was a humorous poem composed when it escaped its cage and went missing. Humor could step in because I thought the snake had stepped out and escaped to freedom.

I wasn’t smiling when we found Luki six months later scooting along the radiator in our downstairs bathroom. Apparently he had wintered comfortably inside our heating system and dined on free range mice. I had wandered the house for all those nights, barefoot in the dark. That is a horror flick in the making.

My husband reinforced the cage with a double-topped barrier but not before Luki escaped a second time. We were faster on the search response and tracked him down as he curled around the split leaf Philodendron.

Why did I agree to read her manuscript? Erica had me hooked when she said it was inspired by someone in her life who had been pure evil. She was dealing with her own demons. It took me about two seconds and a quick recall of my great escape python poem. At the end of the day, or end of the page, we’re all working through things in our lives. “A frighteningly good read – it’s Mommy Dearest with scales. Count your blessings that evil Astra is not your mother. Ferencik is an exciting new voice in horror.”  Betsy Fitzgerald, author of October Run

It's a serious thing to be alive. So says Mr. Waffles. And I agree. #wafflesthewonderdog 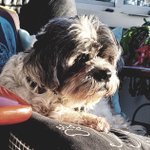 Google thank you for #BettyWhiteDay

This is the day. I begin my new story. Writing gods get ready.