Anybody would fall in love with Linda. She had a smile as sweet as sunshine, masses of curling red hair and the quiet confidence of an artist. I had my first little-girl crush on my cousin Linda. She was actually my cousin-in-law, who married my older cousin Bobby Percoski.

I first met her on an Easter Sunday at my grandparents’ farm. Our house, like the homes of most of my father’s siblings, was in a sort of rural farm version of a Kennedy compound. The houses were built on pockets of land carved from my grandparents’ land. On that Easter, Bobby arrived with this beautiful young woman in tow. He introduced her all around. I thought we were the luckiest family in the world to have Linda as part of us. She was movie star pretty. And an artist–a calling that seemed exotic in a town where people were farmers or ran local businesses.

Theirs was the first wedding I ever attended. Added to Linda’s specialness was the fact that she was “protestant,” marrying into a family of immigrant Catholic Poles. On her wedding day at the Congregational Church on Main Street, she glowed. The fact that my cousin married outside the Catholic church only strengthened my conviction that she was something special. Worth it. The fact that she did not convert just added to my awe of her.

I moved on from my hometown when I went to college; Linda and Bobby by then had built their own house in the compound and begun a family. She became a leading light for the artistic spirit of town; he became First Selectman.  Bobby died tragically young in his fifties. I didn’t see Linda until years later, in a most unexpected way.

On a whim, I’d entered a short story contest: The Laurinda Collins Whitney Short Story Competition. It caught my eye because it was based in Somers, Connecticut–the hometown I’d left behind. The story, “Neelie James,” was inspired by my own life. My submission was a winner and I was invited to attend a ceremony at the Somers Public Library. To my surprise, Linda was there, running the program. The submissions had been “blind.”  It wasn’t until the winners were picked that she realized I was a winner.

would be years again before I saw her. Once at a family reunion, but mostly we’ve met at family funerals.

Today is hers. I’m missing her. An artist in a small town, she shone like the precious gem that she was. She aged with beauty as a mother, grandmother. I’m grateful to Bobby for bringing her to us. 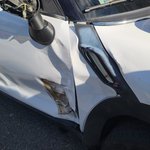