I never know what I’m going to get back when I take my dog to the groomer. Every two months, we take him to be clipped (easy to remember since I’m on the same schedule with my salon). At two months of growth, his wiry, curly hair has twined itself into small knots and his eyes peer out from under a floppy fringe. He looks like he’s wearing baggy polar fleece. This, despite the fact that he gets a soothing oatmeal soak every week or so in the kitchen sink.

It’s not just that he comes home shorn. He literally looks like a different dog. When we first met him at the MSPCA Nevins Farm adoption center, he was clipped but with a sort of bearded look. The adoption papers called him a poodle-spaniel.  Yes, in formal terms, that would be a Cockapoo My husband cringes when I suggest that we might be dog-parents to a canine with an unabashedly silly name. Our vet decided our dog was perhaps a Lhasa Apso, sort of. We have tended in that direction.

No one knows what he really is since he was found as a stray on the streets of Haverill. The dog catchers (canine control officers) named him Waffles. We kept the name, but the spaniel poodle thing has been hard to fathom. Mostly we let him get shaggy and we can forget about it.

Then he comes back from the groomer.  The wiry curly hair is shorn. Big brown spaniel eyes stare at us as if he’s surprised too. People pay huge amounts of money for all the cross-breeds that have become trendy.  I just saw a posting, on Facebook of course, of a Pomsky. It was a Pomeranian-Husky cross–a petite dog with a tiny pointed face and husky black and white coloring and fur. I’ve personally met a Yorkipoo (Yorkshire and Poodle).

You be the judge …. shaggy and shorn.  Cockapoo? Lhasa?  Or just Waffles the wonder dog? 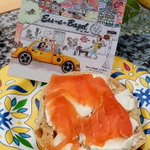