People have asked me “How can you write a novel?”

It’s one word in front of the other.

“Why don’t  you write short stories? That would be so much easier?”

Not for me. I learned early that my best fiction came in long form.

I admire writers of short stories — the good ones. I am in awe of the great ones. It’s a craft that requires singular restraint and laser focus. Poems even more so, but I blunder into those for my own personal expression. I’m not seeing a slim volume of poetry in my writing future. Stringing those words one after another, knitting them into the fabric of a story that crosses time and characters, peaks and plummets, it’s what I love to do. And I’m doing it again. I am closing in on 200 pages of the sequel to October Run. I’m tracking psychologist Phred Rivers though the challenges of righting wrongs, with little more than common sense and stubborn persistence. And a fair understanding of motives of anyone, except herself.

I can’t conceive of confining Phred to a short story. She just wouldn’t fit. October Run featured a road trip down the Eastern Seaboard, punctuated by Phred’s lust for escapist daydreams. That may be me as well — a hunger to run down open road and imagine what will happen next.

If I keep running down that road, one word in front of the other, at the rate I’m going, I’ll have a complete manuscript for November Comes Early in July. There are days when the words are not my best effort, but I learned in journalism class that I had to keep going if I wanted to hit a deadline. I’ll edit. My editor will edit. And the words will be a new novel.

It’s a kind of magic.

My view as I push through final edit. Whatever it takes! 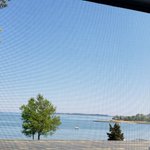 This is the week I finish my edit. Headed off to writing hideaway. Wish me luck!!