I am not the easiest person. Writing is my best form of communication, so unless someone happens across my blog, connects on FB or INSTA where I share often, or hits the bigtime and reads one of my novels, they often walk away.

Who is that woman? What is she all about?

One would think that time is an educator. Not so. There are people who have known me since birth who tolerate me, or not, without understanding big chunks of my DNA. People who spent a decade working closely. Many of those unfriended me as soon as was acceptable after I left the job. Some before that. Long time friends may know parts of my puzzle, discarding the pieces that are too difficult. You know, where the jigsaw cut lots of blips in same colored background?

Then, then, are the people who step into my life, both feet planted and facing me with an open heart. Kindred spirits, many. Writers, but certainly not all writers because we are a wildly varied cohort. Creative people, often. Painters, artists, musicians, poets, carpenters, medical heroes of all types, animal savers/lovers. That’s the short list. Looking at it now, I see that my own up and down all around life aligns with original creators, people living life with humility and hope and humour and honesty. There’s probably an aurora borealis themed graphic in all of this too, since I feel most deeply when color is brushed in landscape covering swaths. Recently, I was gifted with an unexpected, sublime piece of my history. She didn’t know my story, just that I’m a writer. She wanted a new home for an Underwood “Champion” typewriter. It’s sleek black and chrome and was designed to be a portable, with leather carry case. A product of the 1930s and 40s. It would count as weighed luggage if I tried to travel with it. It was her husband’s. When he died last year, it needed to go to someone else and she chose me.

I learned to type on an Underwood, in  Mr. DiFranco’s typing class at Somers High School. No electricity involved. The keys were stiff and were a real workout. When I signed up for journalism class at UCONN a couple of years later, the first question: “can you type?”   Half the class was dismissed for the semester and told to take a typing class. I stayed. Oh yeah.  The rest, is my ongoing history.  I did buy an IBM Selectric when they became available. Then a word processor. Then computers (my first was a WANG). A few years back, I full circled when Art gifted me with a QWERKYwriter keyboard that drives my tablet with keys that CLICK CLICK CLICK.  The sound of writing is my heartbeat. Early on when I went to writing retreats and brought a portable typewriter, a Royal that had also gone to college with me, everyone knew when the muse was singing in my ear because the tap tap tap could be heard through my bedroom door.

My new friend didn’t know. But she did. When that happens, the brilliance of knowing and being known, life makes sense. Eclipses. Tornadoes. Blizzards. Life and Death. Seriously, everything.

@PoetRose My daughter's dog, but he does hace a sense of style!

When an aging Pom claims my sparkly sneaks, I kinda have to share. Luckily, brought a couple pairs of shoes with me. 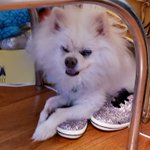 BRAVO President Biden and the members of Congress who stepped up. You've made a difference

Who's in control? I stepped into an alternate universe this week. #writerslife 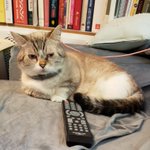