The house smells like meatloaf. This morning I had a migraine. Yesterday, I celebrated being a mother. And there’s more. Mmmmm.

If you’ve ever heard Johnny Mercer/Henry Mancini’s Moon River sung just right, you know that the spoken M wraps itself around you with strong arms. It holds you to the moment — floating down the river of the song or settling into the comfort of a recipe from your mother’s cookbook. It captures you in an embrace with its wide arms. Lyricists know that any singer sounds so so smooth on M.

But watch for the sharp-point as well. Then  you get migraine. Madness. Mayhem. Maelstrom.

As a bona fide moon fan, I tend to go the other route. Magic. And mindful. Mirth and mist.

How did M&M get their name? Wiki tells us that one M was for Forrest E. Mars Sr., and one for Bruce Murrie, the son of Hershey’s Chocolate president William F. R. Murrie.  But I like to think it’s the lip-smacking sound of anticipation of candies that are as bright and optimistic as childhood.

Back when my daughters were little and watching Sesame Street, and I with them, I loved when the show was “brought to you by the letter ___.” Jim Henson and the brilliant minds of Sesame appreciated that letters are important. Give them their due, dammit. Give them a show of their own. Or a candy.

Today is brought to you by the letter M. You pick the next letter!

@jimdrew12724 Ooooh yes! I'm rebuilding a garage to include a writing office overlooking my koi pond!

The best coffee? On a screened porch a few steps from ocean. #writerslife #beachbabe 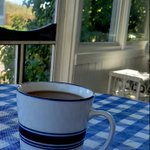 The sun arrived with tumultous clouds! Happy to be able to use that word! #writerslife #beachbabe 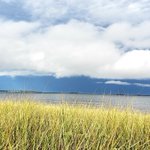