How do you celebrate finding out that you got a second chance to live a better life? For me, it’s all about family and a tattoo artist named Ram.

A year ago, I found out what happens when your life goes out of balance. I had a stroke–a small one with a complete recovery, but it scared the heck out of me. Last Thanksgiving, I was suffering the aftermath and barely able to enjoy what had always been a favorite holiday. This year I’m  celebrating the fact that I’m fine. Better than fine. And way better than a year ago

Family.  Despite the crush of work that is part of my day job, I’ve taken all of Thanksgiving week off to enjoy every second of it. I love to cook. I’m savoring the shopping. Even the housecleaning is a delight. I’ve reorganized the kitchen, finding satisfaction in creating new open spaces.  Braving the holiday crush of traffic and then delayed Amtrak train was no big deal. When my daughter finally stepped off the train from New York and into a hug, it was like Christmas morning, though I know that’s mixing my metaphors. Ram. Years ago, I acquired a modest tattoo of a Celtic triquetra on my left shoulder, over my heart. I was celebrating a milestone birthday and the symbol of trinity represented who I am as a woman of Irish descent. I thought it would be my first and only venture into the land of ink art. During the past month, I decided that I wanted to bring together my new wisdom and enhance the tattoo.

Tattoos are like chocolate–go for the best or don’t go at all. In an article about tattoo artists favored by star chefs, I found Fat Ram’s Pumpkin Tattoo in Jamaica Plain.  I called and booked a consult with Ram himself. He’s a busy guy, which gave me weeks to think about what a new tattoo would look like. I’m pain averse, so I’d been thinking small. But I began to fantasize about adding a second image to the triquetra. From there, it was a short leap–or flight. The snowy owl has become to me what Native Americans call a spirit animal, representing wisdom and protection.  J.K. Rowling similarly discovered the power of the snowy when she immortalized one in Harry Potter. I found mine in a dream quest and hers, I believe, came to her in a U.K. coffee shop. Ram is not fat; nor does he specialize in pumpkin tattoos.  He is a freckle-faced, perpetually smiling man who in another plane could have been an Irish elf. His work, displayed in books around the shop, was that of a master ink artist. I’d brought a couple of snowy owl images that I’d googled up. He took a look at my triquetra and began sketching. He wanted to go big. I reined him back from designing an image that would throw a full wingspan across my shoulders. Half an hour and many pencil drawings later, we’d come to an agreement. The final will be ready when I return in December…yes he books out a month. I’m trying not to be think about the fact that he reserved two hours for the work.

@misplacedcomma2 @VW7772 Good luck. It's a real battle out there

I may never leave. 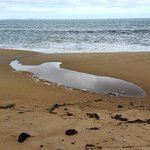 @Latina_Schatje No because I'm in a rented beach house. Going to stock some now!